Zemez team has been observing Gutenberg editor for a very long time. We were genuinely interested in the product and were waiting for the better moment to create our first product suited for this new WordPress editor.

In the beginning of this summer, Matt Mullenberg finally introduced Gutenberg editor integration to WordPress v.5.0 at WCEU, and that was exactly when we decided that the time has finally come.

Our team hasn’t thought too much about the purpose of our first plugin. Instead, we just took our most popular best-selling JetElements plugin and decided to create a similar addon for Gutenberg, that would introduce the widget blocks for adding more content to Gutenberg-built pages.

As a result, we have created JetGuten, the first addon for Gutenberg editor.

Hoping it will be of help if you’re just planning to start developing your own products for this page editor.

Developing for Gutenberg: It’s all about JavaScript, not PHP

Even in 2015 Matt Mullenweg told us: “Learn JavaScript. Deeply”.

It was the disclaimer, that showed us in which direction all WordPress developers should move in order to keep pace with times.

And now, when developing the product for Gutenberg editor, we see the truthfulness of this statement.

For one, here is the statistics of usage for different programming languages in JetElements, one of our team’s most popular plugins for Elementor. 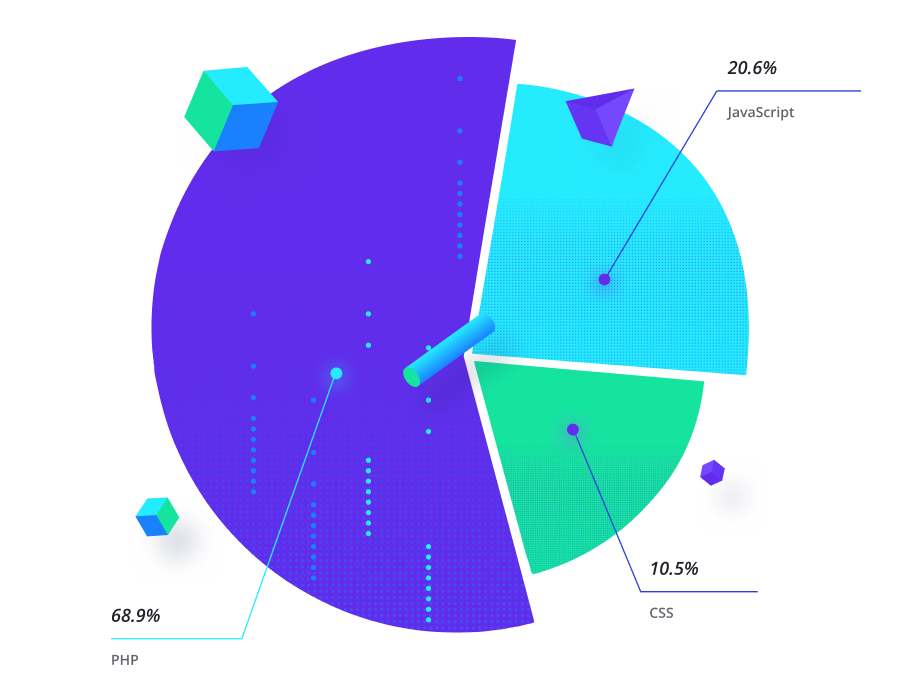 Here is the statistics for JetGuten, our new addon for Gutenberg. 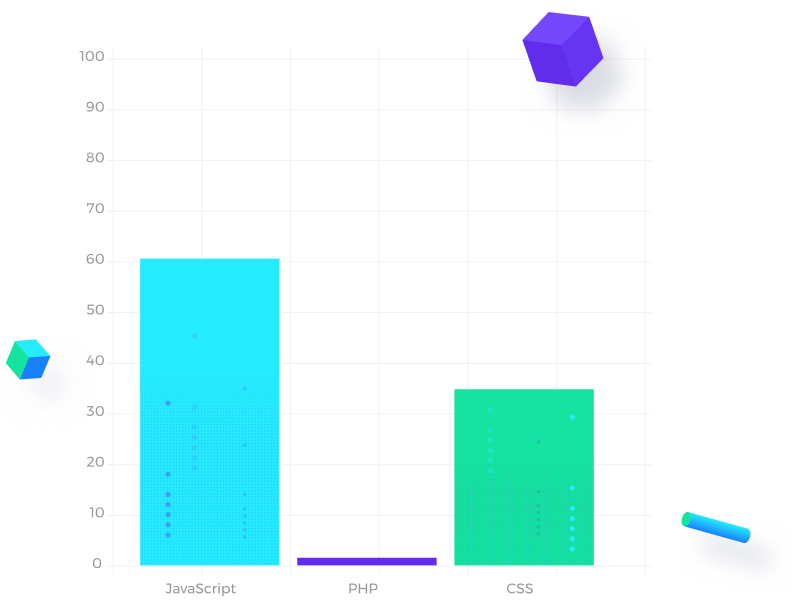 In the first version of JetGuten we needed PHP only for creating the classic “wrapper” of the plugin, enabling CSS and JS files and for several implementations of AJAX callbacks.

For everything concerning the appearance and blocks settings we used JavaScript.

Sure, this doesn’t mean that we don’t need PHP at all. The backend will still be there in the more complex blocks, which work with posts, taxonomies, third-party API. However, the most part of the code will be written in JavaScript.

During the years our team has been working with WordPress, we have used one of the most basic principles of programming – “always separate the logics from the presentation”.

Taking it closer to WordPress, such separation can be divided into two different aspects:

You can find the separation of templates and the files with the logics in any WordPress theme. The same is true for the plugins. The most popular e-Commerce plugin WooCommerce can easily illustrate this statement.

The “Templates” folder includes the files for presentation. 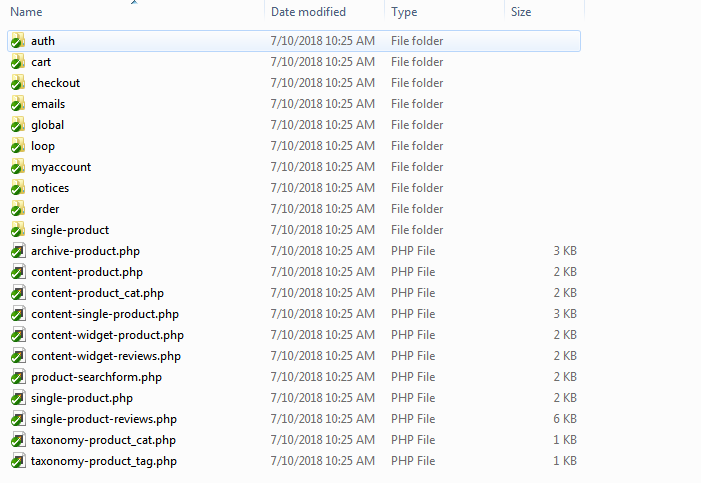 The “Includes” folder consists of the files mostly with the logics. 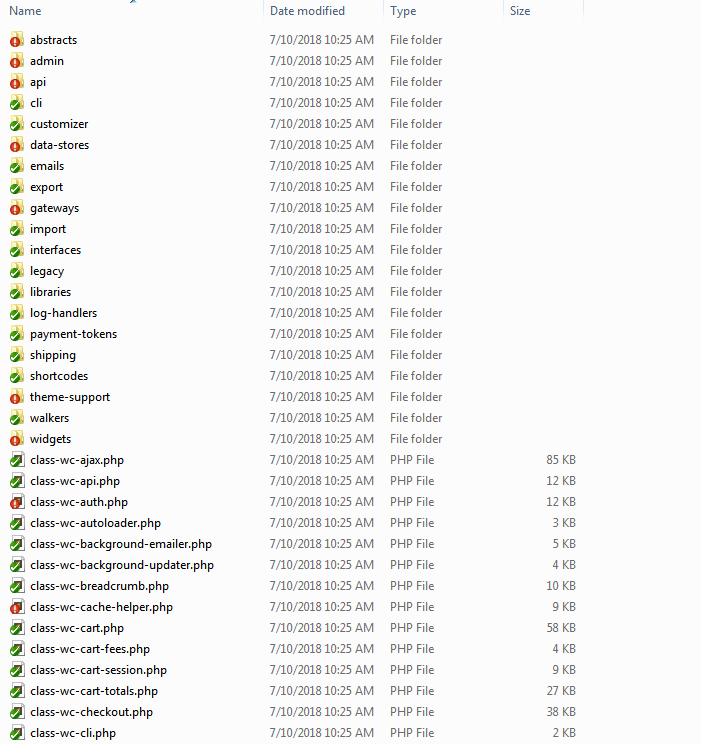 This gives the freedom to both front-end web developers who create the themes, and to end-users.
They actually have no limits in changing the HTML layout. And the functionality will always remain the same.

This freedom was torn from us in Gutemberg editor – at least, for now. The logics is closely tied to the appearance, and this is why you can’t just overwrite the design from the theme.

Both front-end developers and end-users are limited by using CSS only for changing the appearance of the blocks.

We can’t deny that it’s also a very handy tool. However, in some situations the ability to edit HTML layout of the blocks is extremely needed.

No Limits in Creating Interfaces

The first location is the body of the block inside the editor.

The second one is the side panel with the settings, also called “block inspector”.

You can use any elements for managing the appearance of the content inside these locations. I mean, both the standard ones, that are already included in Gutenberg, and the custom ones.

For one, for Animated Box block we have added a control, which switches the block to the front or back side for more convenient editing, and added it into the toolbar of the block’s body. 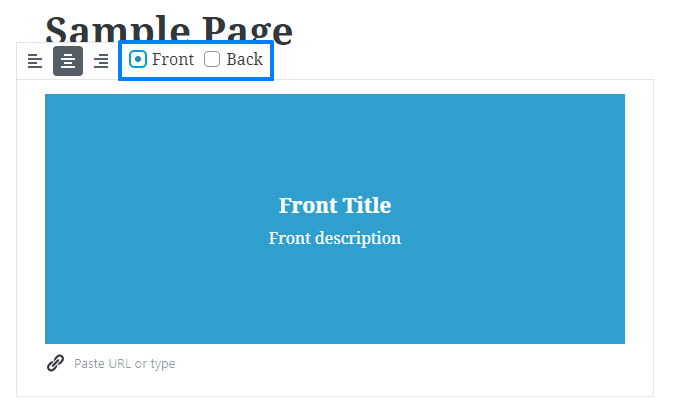 Such approach gives the developers so much freedom in managing the interface.

Yes, it might be different from the one used when developing the Jet plugins for Elementor. However, it gives us even more tools.

The Freedom to Introduce Blocks in Editor and to Front-end

If you’d like to compare Gutenberg with any other existing page builder, you’ll find out that it has another great benefit. I’m talking about the opportunity to separate the appearance of the block in the editor and on front-end.

Somewhat similar functionality is available in Elementor, and, frankly speaking, any other old-school page builder initially was representing content in the editor and on front-end differently. There are lots of examples: like Divi, Visual Composer, etc.

However, only Gutenberg gives the developers the full freedom to represent the content on front-end and back-end the way they want and need.

We need to implement two methods for any block in Gutenberg: edit() and save().

So, in other words, the developer is not limited by the condition, that the block has to look in the editor the same as on front-end.

Instead, the developers can choose how the blocks will be represented in editor, themselves.

To understand in more details how this will help in practice let’s look closer at Image Comparison block from JetGuten plugin.

This block gives opportunity to compare two images on frontend by toggling the control. This functionality is implemented with the help of third-party library.

The main problem we have faced with this block in editor is that with every change in the block’s settings, the script that is responsible for toggling the control has to be initialized once more, while taking into account the new settings.

In order not to overload the editor with the extra actions in the edit() method we have created HTML-markup, that is equal to the result you’ll have on front-end. However, there is no option for toggling the control.

In the save() method we just save the needed markup for the third-party script to be initialized.

Actually, this way you can set all the necessary components of the block in builder without creating an overweight in the browser. And on front-end this method makes possible to get the fully-fledged block with all the functionality.

The Lack of Best Practices

One of the things that also caused us a bit of trouble while developing a plugin for Gutenberg is the lack of the so-called “best practices” for creating blocks for Gutenberg.

We have listed the sources that immensely helped us, below:

For our team these sources turned out to be the most useful from the practical point of view.

However, it’s obvious that they haven’t covered all the specter of questions, which were surfacing in the process of development. And this meant that in some situations we were flying completely blind.

That’s why we’re almost sure that when we’ll open the code of JetGuten plugin in the future, many solutions will turn out to be irrational, and sometimes even wrong.

I don’t want to say that this is the negative side of Gutenberg plugin – this is normal when the product has just rolled out.

With each day more and more Gutenberg-centered tutorials and guides are created. I think, there won’t be any lack of best practices in a year or so.

But for the moment of development JetGuten this turned out to be a real complication for our team.

We don’t deny that this problem goes from the one that’s been already appointed above. Maybe, it’s not even connected to Gutenberg. Yet, we have faced the issue with the sensitiveness of the blocks to any changes in the HTML-markup.

E.g., almost any change in the markup of save() method causes the issues in the blocks that are added earlier.

When you’re in the process of developing, this is not really worth talking about, yet the problems might surface with the updates. The changes in the markup of the block might make it broken for all clients who have added it before the update was made.

The Automatic Build Tools are of Vital Necessity

The automatic build tools, such as Gulp, Grunt, NPM, etc., have become the inevitable part of life for every web-developer.

However, the developers of some standalone WordPress plugin could sometimes go without them.

For one, in the case the plugin has only several JavaScript code lines in it and a bit of CSS code, the use of the automatic build tools will only make your workflow more complicated.

Such situations were completely acceptable in cases where you were creating the plugin with several small shortcodes for further using them in the editor.

As for now, if you want to make the plugin compatible with Gutenberg, or you’re going to convert the shortcodes into blocks, you won’t be able to do this without the automatic build tools.

Here are the main reasons for this: